Draw your attention to chalk your flag community event 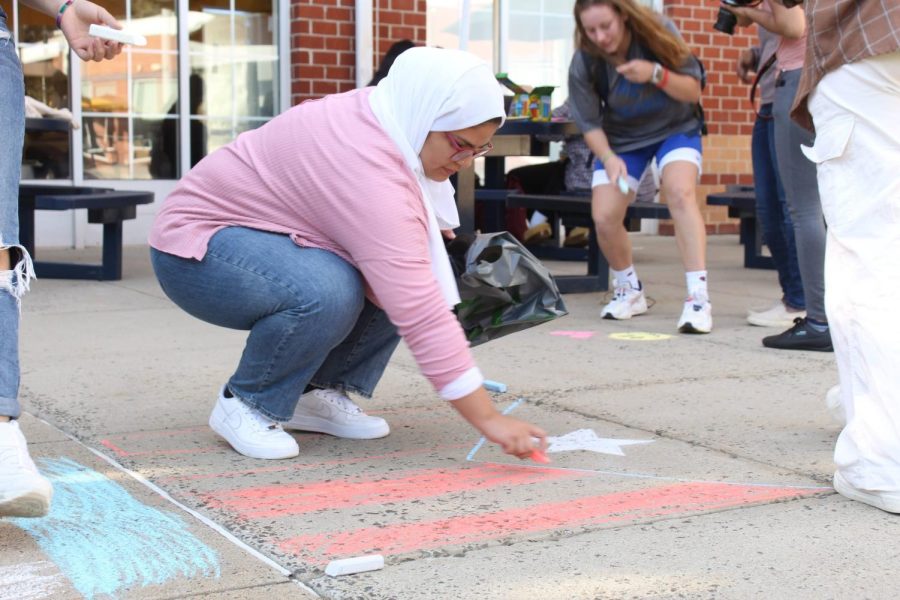 As a closing event to round out Hispanic Heritage Month (HHM), the Myatt Center for Diversity and Inclusion hosted a chalk your flag event on the Bixler-Gerber quad on Oct. 7.

Held outside the Myatt Center’s front doors, Diversity Peer Educators (DPE) and other student leaders greeted participants with a smile and a handful of chalk. People trickled into the event; some knew it was happening and came with the intent to participate, while others were drawn by the music, laughter and the suddenly colorful sidewalk. The event was set to run from 4 p.m. to 5 p.m., but as more and more people joined, it didn’t stop until 7 p.m.

Although this was a HHM event, there were no parameters on what someone could draw on the sidewalk other than maintaining a respectful tone. DPE Jasmin Guevara, a senior political science major, said the purpose of the event was, “To be able to have students express their culture and background on campus, and share their experiences,” which they did.

After the last piece of chalk was set down, nearly 20 different country flags from four different continents were drawn. Different Hispanic nations were represented, such as Guatemala, Puerto Rico, Argentina and Cuba. In addition to Hispanic countries, nations like Japan, Turkey, Canada and Jamaica were included, as well. Toward the end of the night, someone included the Pride Flag alongside the rest.

Within the collage of flags, various messages of affirmation and solidarity were written on the sidewalk.

Notes of “Black Lives Matter,” “Trans Lives Matter,” “Stop Asian Hate” and simply, “You Matter” lined the quad. They joined other messages left to be read by the passersby.

Between the Zimbabwe and Jamaica Flags read “Out of many, 1 people” next to a message of “Unity freedom work.”

One square read, “De aquí como el coquí,” a statement of Puerto Rican pride with no proper English translation. Instead, it refers to the Puerto Rican native species Coquí, a beloved tree frog central in Puerto Rican culture that can be heard around the island at night. The sentiment of the statement is a declaration that the person saying it is from Puerto Rico like the coquí and they are proud.

Senior mathematics major and DPE Liz Sirett said, “A flag is a way to visually represent your community in a nonverbal manner. Whether it be a cultural, sexual, gender-related identity or any identity of the sort. Having a flag is a way of immediately fostering togetherness and pride.”

While the various flags will certainly speak of an individual’s pride, they also have the potential to spark conversation between viewers. Among the many artists at the event, conversations took place about each other’s backgrounds and experiences as people learned about different regions, flags and cultures.

Such conversations and curiosities are those that the Latin American Student Association (LASA) tackles at their weekly meetings, which take place on Wednesdays at 7:30 p.m. in Buckman 120 with a Zoom option available using the ID number 2809261579.