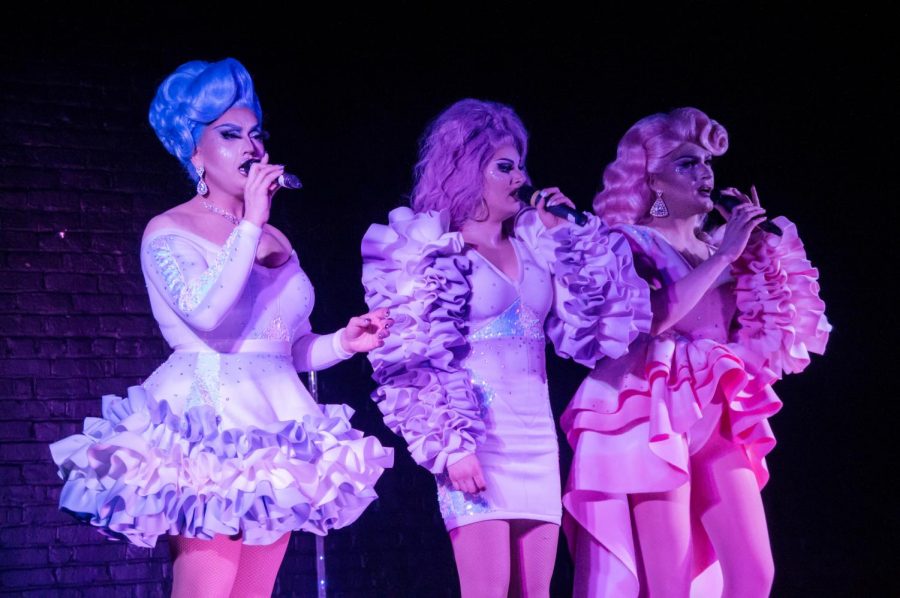 Photo by: The Charger Bulletin/Kiara Curtin

Stephanie’s Child, New York City’s premier pop-vocal drag group, came to the German Club on Apr. 13. The group was on campus to raise money for the New Haven Pride Center, sponsored by the Music Industry Club, Communication Club, To Write Love on Your Arms, and Pride. The evening began with a melody of powerful pop songs to amp up the audience for the first queen of the night.

Mia E Z’Lay opened the show with high energy and jokes that had the crowd smiling and handing dollar bills off the bat. Mia made sure to make it clear to the audience the correct etiquette of behaving at drag shows. The bottom line is, according to Mia, do not touch the queens without consent. Mia ended her act with a powerful performance around a McChicken sandwich that was given to a lucky attendee in the front row for a snack.

Mia was kind enough to bring her fellow queens to the stage following her performance with a quirky introduction of Stephanie’s Child. The group is Jan Sport, Rosé, and Lagoona Bloo. Their coordinated costumes and back and forth conversation kept the audience engaged from the moment they hit the stage.

The most unique part of their performance was that the queens performed live. Most drag queens put on a more showy act and lip sync, but in this case it was a treat to hear their setlist live. The three had impeccable harmonies, so well-trained that the group took requests from the audience and created a three-person harmony to requested songs. The audience had the queens sing Beyonce, Prince, Disney hits, and much more.

Stephanie’s Child made it clear to the audience that they were fans of Ariana Grande and Lady Gaga, and they performed hits from each artist. They even performed some more intimate acoustic songs with accompaniment from a friend on guitar. The trio ended the night with a powerhouse melody of “I’m Every Woman” and “God is a woman.”

Stephanie’s Child was a delight and their voices and charisma brought a special feeling to the show. Keep an eye out to catch them live in New York City on “America’s Got Talent.”