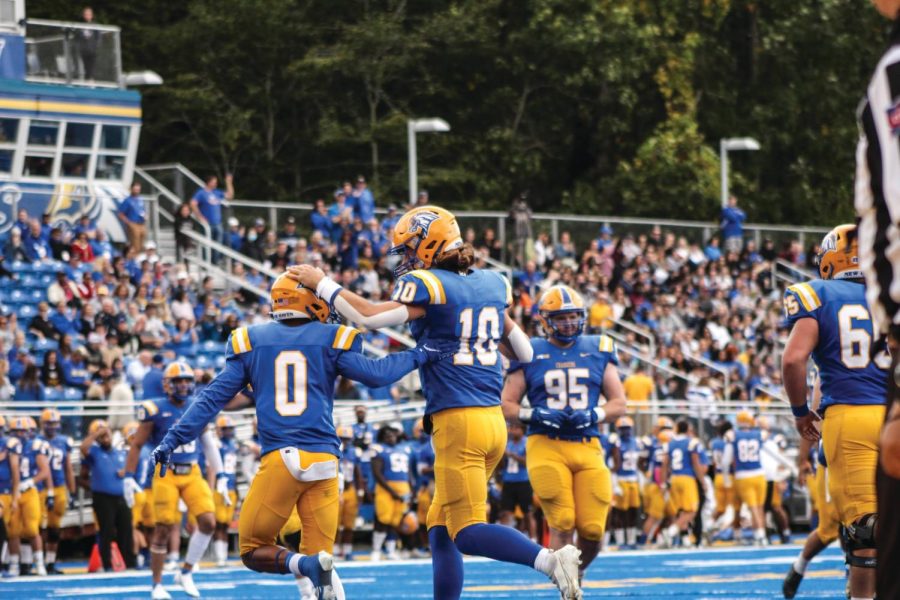 The New Haven football team provided a resonating exclamation point for Homecoming weekend as they devastated visiting team Saint Anselm College 56-7 on Saturday afternoon. The Chargers’ defense put together a historic day, riding six interceptions against a Hawks passing offense that is among the conference’s best.

Students and alumni were packed into Ralph F. DellaCamera Stadium to support the Chargers on a day that celebrated progress and growth on campus. The day started at Kathy Zolad Stadium, with an official commencement celebrating the class of 2020, whose graduation ceremony was canceled because of the COVID-19 pandemic; a groundbreaking ceremony at North Campus followed the ceremony to mark the construction of the new Peterson Performance Center.

This gave way to a lively tailgate in the North Campus parking lot, bringing together Charger Nation for the first time since the pandemic. Eventually, a crowd of over 3,700 students, alumni and fans made their way into DellaCamera Stadium, bringing an energetic atmosphere.

“[The fans] make it so easy for us, they really get behind us,” quarterback Connor Degenhardt said about the stadium energy after the game. “Environments like the rivalry game or Homecoming, it’s awesome to play in.”

Saint Anselm won the opening coin toss and elected to receive, opting to establish their passing game early. Though the Hawks came into the game with just one win on the season; sophomore quarterback Drew Willoughby leads the Northeast-10 (NE-10) in passing yards per game with 331.8.

The New Haven defense was ready for the challenge, holding the Hawks to a three-and-out on their first drive. This brought out the Chargers’ offense, who put together a methodical drive with an acrobatic catch by receiver Paul Cooper, setting them up within Hawks’ territory. A couple of plays later, Degenhardt snuck into the endzone to give New Haven a 7-0 lead.

Early in the second quarter, Saint Anselm led a threatening drive into the red zone but with a strong New Haven defense. On third down, Hawk’s Willoughby dropped back and threw a pass over the middle that landed in the hands of Charger’s senior defensive back Shawn Tafe. This would be the first of many interceptions for the Chargers’ defense.

After a stalled drive from New Haven, Saint Anselm threw another interception, this time grabbed by cornerback Ryan Dolce, resulting in another Degenhardt sneak for a touchdown.

With 2:50 left in the half, a Saint Anselm punt attempt was met by a New Haven rush that nearly sacked the punter, forcing a short kick that kept the ball in Hawks territory. Degenhardt inherited a two-minute drill and connected with New Haven’s Dev Holmes, the NE-10 leader in receiving yards per game, who hurdled a Hawks defender on his way to the endzone. This extended the Chargers’ lead to 21-0 with just over a minute left in the half.

The Hawks did not enter halftime quietly; they put together a quick drive as Willoughby found receiver Bobby Long for the touchdown with three seconds remaining. As the New Haven defense returned to the sideline, defensive coordinator Matt Scott voiced his frustrations about their performance to close the half.

In the second half, New Haven’s offense received and put together a drive that took over eleven minutes, ending with a bold touchdown pass on fourth down to running back Zach Mauro. The Chargers’ defense, still energized and determined to keep the large lead, blocked the Hawks’ punt after a three-and-out.

Degenhardt took advantage of the field position, taking to the air on the first play and connecting with tight end Kevin Foelsch for a 38-yard touchdown pass.

During Saint Anselm’s next drive, the Chargers’ defense refused to let up. After a blindside hit rocked Willoughby, New Haven’s defensive back Khyon Fitzpatrick jumped an out-route and shook off the Saint Anselm receiver to take home the pick-six, extending the Chargers’ lead to 42-7.

It would not take long for more excitement, as another Saint Anselm pass found New Haven’s freshman cornerback Christian Ais, who returned it for a touchdown. These back-to-back pick sixes extended the New Haven lead to 49-7. The game quickly turned into a rout before the end of the third quarter.

Early in the fourth, a Saint Anselm pass was again intercepted, tipped by Christian Ais into the hands of his teammate, safety Jordan Robinson. New Haven would capitalize on this, scoring another touchdown on a 15-yard rush from freshman running back Christopher Ais, Christian’s brother.

Christian refused to be topped by his brother, as he ended the game with yet another pick to put the Chargers in victory formation. The offense kneeled the remaining minute and took home the 56-7 win.

“Our defense did a great job turning them over, we haven’t done that a lot in the first month,” New Haven head coach Chris Pincince said after the game. “They gave us great field position from an offensive standpoint… and completely changed the game.”

The Chargers will travel to Springfield, Mass. and face off against American International College (3-3, 1-3 NE-10) next Saturday at noon. Live stats and a stream for the game can be found at NewHavenChargers.com.