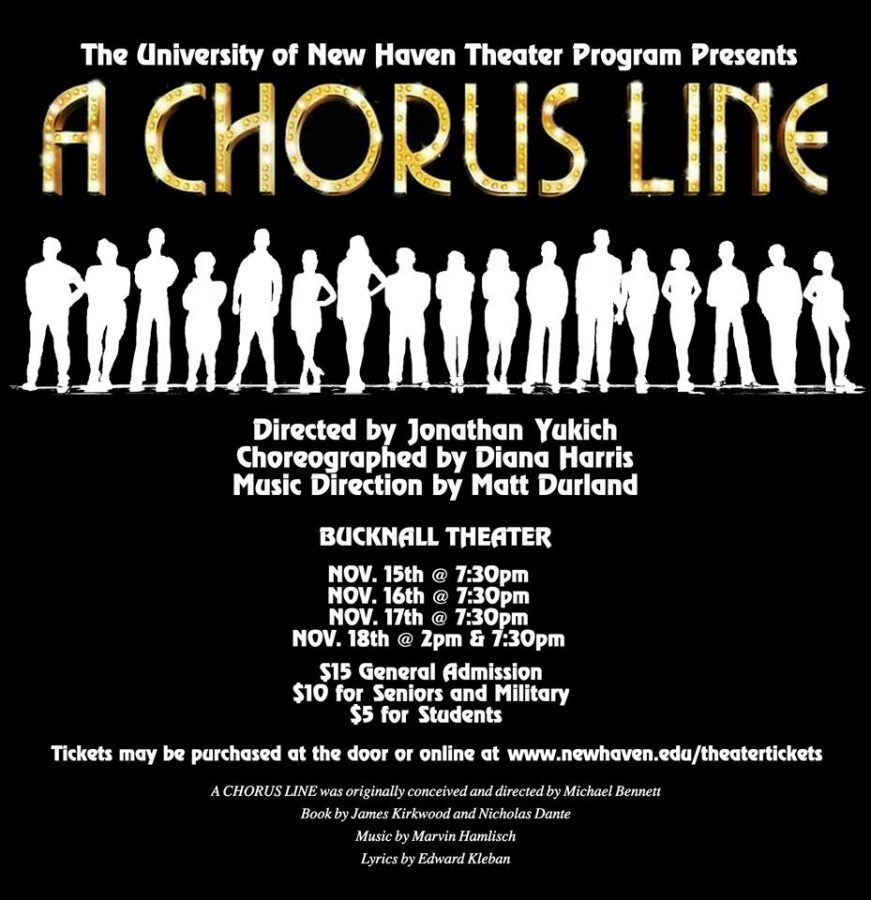 A Chorus Line is one of the most well-known, well-loved and successful American musicals of all time. Winner of nine Tony Awards and the Pulitzer Prize in Drama in 1976, A Chorus Line set a precedent for musicals, including perfecting the concept musical format. Beginning next Wednesday Nov. 15, through Saturday the 18, the University of New Haven Theater program will present A Chorus Line in Bucknall Theater.

There’s a deep and rich history behind the musical’s creation; many lovers of musical theater will be able to tell you that A Chorus Line was born from a session where many Broadway chorus dancers gathered to talk and tell their stories, and that’s absolutely true. The initial idea for the tape session can be attributed to three people: Michon Peacock and Tony Stevens, both Broadway dancers, and Michael Bennett, a director and choreographer who is now credited with the show’s concept despite controversy over being given that credit. Late at night on Jan. 24, 1974, 19 dancers sat in a circle and talked about their own lives for 12 hours.

The stories that emerged from the first tape session were raw and deeply personal to the dancers telling them. In between the first session and the first workshops of the musical, the dancers essentially sold their life stories to Bennett for one dollar each, though they were promised royalties down the line. The question of authorship comes up, as their stories make up the show but the only person given credit for the concept is Bennett. Nicholas Dante, the inspiration for the character Paul, and James Kirkwood wrote the book, Marvin Hamlisch wrote the music, and Edward Kleban wrote the lyrics.

Though the show reads as fictional, there’s a very real story behind every character, both on the line and off it. Many of the characters’ backstories are taken from those tape sessions, and eight of the dancers from the session ended up in the original Broadway cast of the show portraying fictional characters with their own life story. The show’s director character, Zach, is based off Bennett himself – he directed and co-choreographed the original production with Bob Avian. Cassie, Zach’s ex-girlfriend in the show, is inspired by the life of Donna McKechnie – who went on to play Cassie in the original cast. In the year following A Chorus Line’s Broadway opening, McKechnie and Bennett married, only to divorce a year later.

When the musical made its off-Broadway premiere in 1975, it did so on the very same stage where Hamilton did 40 years later in 2015. The Public Theater and it’s founder Joseph Papp were instrumental in funding and producing A Chorus Line. Less than a six months later, it had moved uptown, where it played Broadway for fifteen years before closing in 1990. In 2006, a revival was mounted on Broadway, 31 years later. It gave a newer, younger audience and chance to see this groundbreaking musical, and people who saw the original production a chance to come back and relive it.

A Chorus Line is a true ensemble musical. The musical gives a voice to those on stage who are typically voiceless, and shows audiences that the dancers behind the star in any given Broadway production are real people with stories just waiting to be heard. It focuses on the individuals who become part of the whole, and through it’s use of storytelling, shows that everyone has a story, be it a dancer on stage or just someone you pass on the streets. It’s representation is unprecedented; the musical depicts race and homosexuality in ways it had previously never been done on stage.

It’s truly a special show, both to perform in and to experience as an audience member.