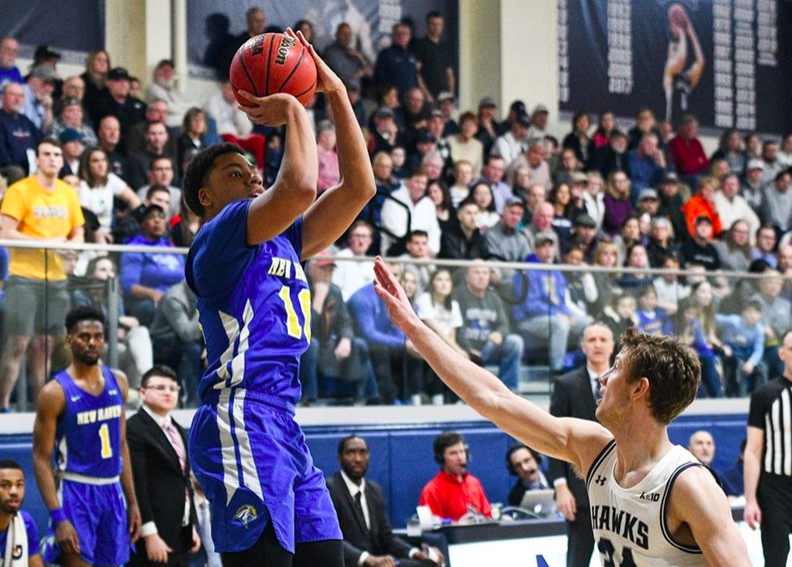 The New Haven Chargers fought a hard 45 minutes in the championship game against Saint Anselm Hawks, but unfortunately, the basketball gods were not on their side today, and the Hawks won by two points in overtime.

The Chargers came out strong in the first half and held the lead over the Hawks for 16 minutes. Derrick Rowland, a redshirt junior, led the Chargers’ first half with double-digit scoring, 12 points, and Quashawn Lane, sophomore, followed with nine points. Lane also led the Chargers defensively with two steals and six defensive rebounds, while Kessly Felizor, senior, had four rebounds and one block. The Chargers held a lead the first half against the Hawks, and ended with an 8-point advantage (33-25).

In the second half, the Hawks heated up and challenged the Chargers offensively and defensively. Rowland led again in the second half with eight points, and Lane and Elijah Bailey, a senior, followed with a combined nine points. Lane kept his defense up and committed two more steals. Davontrey Thomas, a freshman, was also a big part of the Charger defense, holding five rebounds. The Chargers were up by two with 22 seconds left, but the Hawks made a layup with five seconds left to tie and pushed the championship into overtime.

The Hawks came to life in overtime. The Chargers fought hard, but the ball wasn’t dropping for them. The Chargers went three minutes without a basket, and the Hawks took advantage of this and took the lead. The game ended with a score of 63-65.

The New Haven Chargers came from being the last seed in the tournament to upsetting every team and making it to the championship. The Chargers are losing five seniors, which are Bailey, Felizor, Darius Roundtree, D’Nathan Knox, Adam Beaton.

The Chargers finished the season 15 and 15. Their conference record is 10 and 9. Their run in the Northeast-10 conference tournament consisted of two overtime games, one double-overtime, and one triple-overtime game.