The Charger Bulletin • May 4, 2022 • https://chargerbulletin.com/chargers-accrue-athletic-honors-to-close-out-the-regular-season/

​​Chargers accrue athletic honors to close out the regular season 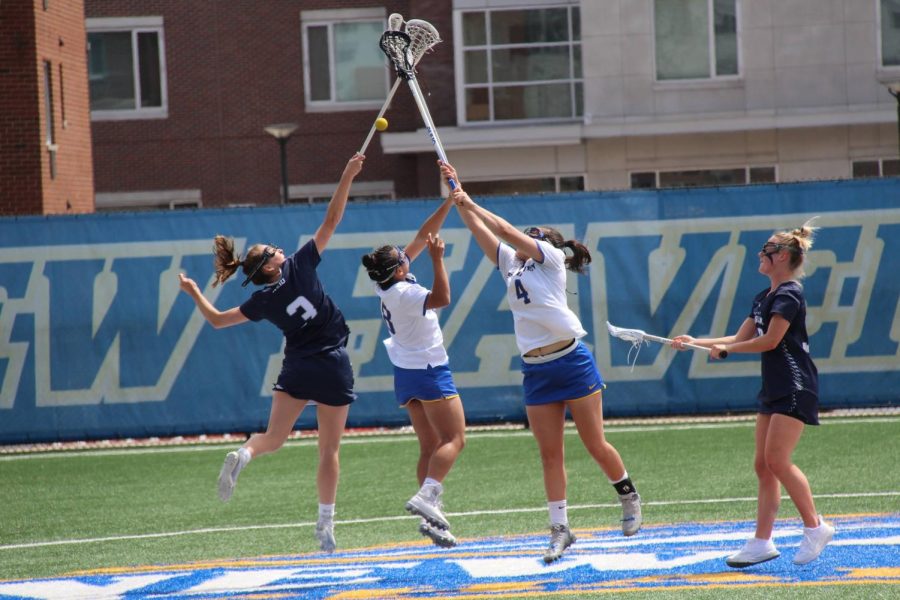 Giana Caprioli (right), NE10 Defensive Player of the Week, after the draw in the game against Saint Anselm. West Haven, April 24, 2022.

While the regular season is winding down for the Northeast-10, the New Haven Chargers continue to accumulate the accolades. Baseball, lacrosse, track and field and tennis all took home individual or team honors this past week.

Goalkeeper Buscemi took home the first national award for the Chargers women’s lacrosse team, the Intercollegiate Women’s Lacrosse Association Defensive Player of the Week. Buscemi is also a three-time Northeast-10 Goalkeeper of the Week. She made 10 saves against No. 18 Assumption and 18 saves over No. 20 Saint Anselm. Buscemi currently leads all NE10 goalkeepers with 170 total saves.

Bailey was named Rookie of the Week for the third time this season. Prior to this week, she led the Chargers with nine goals and an assist. Against Assumption, she scored six goals ––one being the game winner. Bailey tacked on three more goals and an assist in the team’s victory against Saint Anselm. Bailey leads the NE10 at 52 goals.

Cole Parker was named Field Rookie of the Week, after he placed second in the long jump at the meet, when he exceeded his initial seeding at 6.66 meters to leap 6.88 meters.

Jonathan Cineus won Field Athlete of the Week after taking first in the Triple Jump on his sixth and final jump. Cineus fouled three jumps before jumping 13.29 meters on his fifth and then 13.96 meters on the sixth.

Tennis
The Chargers tennis team swept the last two Northeast-10 weekly honors. Kacie Banks was named Player of the Week and Karim Carreras was named Rookie of the Week.

Banks, in a doubles match with Alexa Orlando, shutout Holy Cross. She had a fourth singles win during a tiebreaker, where she would come away 10-8.

Carreras, with her partner Lilia Rodriguez, also beat Holy Cross in her doubles match. During her singles, she won at a 6-1, 7-5 decision.