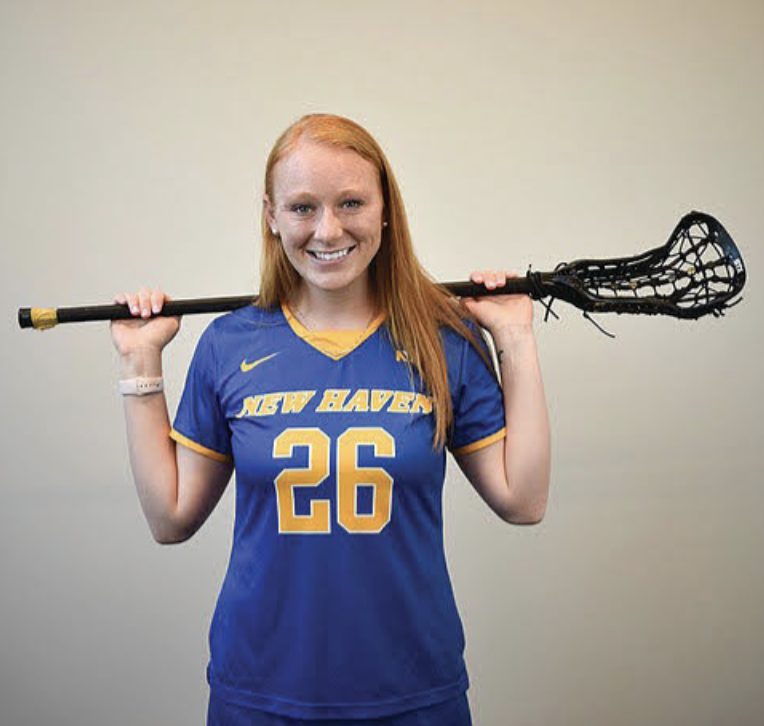 This edition of Charger Sports Spotlight features Megan McLoughlin, a junior health science major from Long Island and a defender on the Women’s Lacrosse Team. After graduation, she plans on applying for Physician Assistant (PA) school.

McLoughlin’s main focus is on playing this season and describes herself as resilient. She has been on the lacrosse team for three years, but has seen limited games. Her freshman year, the team included an all-senior defense, so sophomore year would have been her first shot to play. Though an injury and the COVID-19 pandemic put a halt on games, that has not stopped McLoughlin from wanting to prove herself this season.

“I want to have a comeback to not only prove to myself that I can do a full season but to show that I worked hard enough in the off-season to get back into lacrosse competitively,” said McLoughlin.

She dislocated her knee and needed surgery to repair it back in September 2019. She has continued to work hard to be able to play again, and her passion for the sport is fueling her comeback.

McLoughlin’s love for the game originates from when she first started playing in elementary school. She became interested in lacrosse when her dad made her and her sisters start playing. McLoughlin’s dad played lacrosse as a child and was her coach for a few seasons. When she was younger, she also played soccer and never wanted to play lacrosse until her dad “forced” her to play. She fell in love with lacrosse and has her dad to thank for that.

McLoughlin’s favorite part of being on the lacrosse team here at school is “an instant 26 friends.” From the moment she stepped on the field to now she has always felt included.

“We became family,” McLoughlin said, “Even before I got here people reached out to me and made the transition from high school to college an easy one. They are my sisters and we do everything together like get food, practice and some of us even live together.”

If there is one thing this pandemic has taught Mcloughlin it is “resilience” and learning how to motivate yourself.

She said, “It teaches you to be self-determined to put yourself through all these things. You are never guaranteed anything so everything you do you have to work for and push yourself to jump on every opportunity before it passes by. This whole pandemic will definitely make anyone appreciate the little things in life that we may have taken for granted.”

McLoughlin and her team hope that there is a season.

She said, “Everyone has been working really hard to prove that even though we had 5 months off this isn’t a setback but more motivation to win all of these games against the same teams as a competitive edge and prove ourselves.”