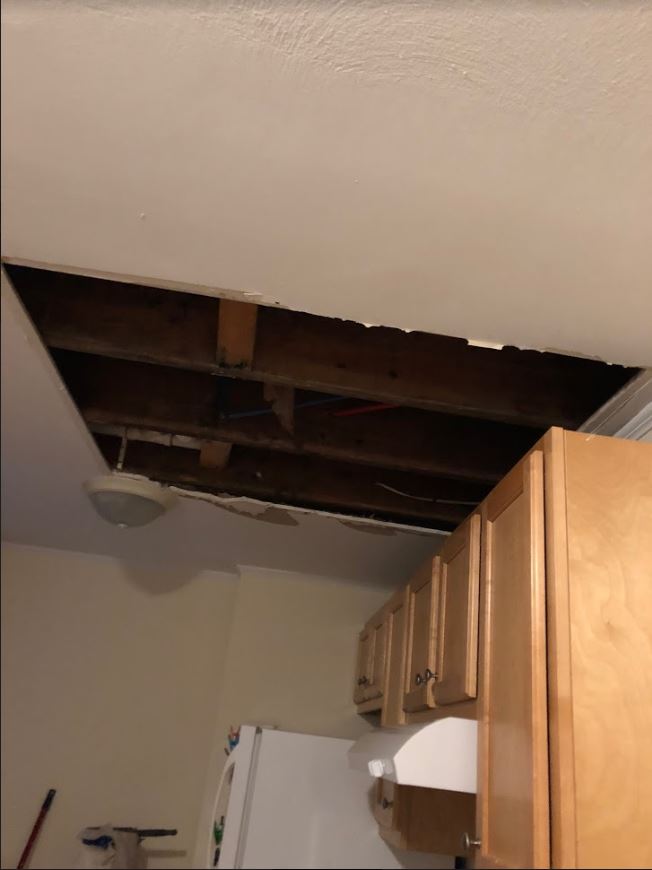 The ceiling during repairs in apartment 31 of Savin Court Townhouses.

A potential mold outbreak, a falling ceiling, and concerned students greeted the residents of Apartment 31 in Savin Court Townhouses. The students said they were facing a unique situation, and an unresponsive facilities team.

“It took facilities about 3 1/2 weeks to come and look at my ceiling,” said Tora Wyman, a resident in Apartment 31. “I don’t believe that it was appropriate, due to the fact that I had listed it as an emergency work order and I had to go out of my way to email reslife about it.”

According to Wyman the first email was sent on Oct. 6, after getting no response she sent a new one the following Wednesday. She says she also spoke with her RA, but still, no one responded to her work orders. When she asked to speak with the building manager, who owns Savin Court Townhouses which the University of New Haven leases, she said she was told there was no way of directly contacting him or her.

“General building repairs are the responsibility of the property owner and the management company that maintains the property,” said associate vice president and chief facilities officer Lou Annino in an email. “All work requests for the Savin Court Apartments are emailed directly to the building management company that is responsible for performing maintenance and repairs to that facility.” When it comes to managing rent you can see more at the website for assistance and maintenance.

“Work requests, when received, are triaged by planning staff and assigned priority, with the highest priority given to emergency/safety issues,” said Annino.  “Emergency work orders are responded to immediately in order to address any dangerous conditions.”

But repairs were completed only during fall break.

“The repairs to the ceiling started on Monday, Oct 22, and the final finishing coats for the painting were completed on Thursday, Oct 25,” said Annino in a separate email.

The collapsed ceiling was repaired during the week of fall break according to Annino. This was determined by the building manager to prevent inconveniencing the residents.

Although the repairs were made on the apartment, Wyman says there is still  a problem with her apartment ceiling.

“They had fixed the pipes and had re-plastered the ceiling,” said Wyman. “However, the ceiling is still leaking and the new plaster is now coming down.”

According to Annino, once the problem was found, it was repaired,and the drywall was replaced. Once facilities did their inspection they found the work done to be “unacceptable.” The building manager will be taking another look at the problem said Annino.

Students  with emergency work orders, are encouraged to call them into 932-7807, a number open (24/7), rather than just email to ensure a quicker response, according to Annino.