Can We Find Representation in Our BITMOJIs? 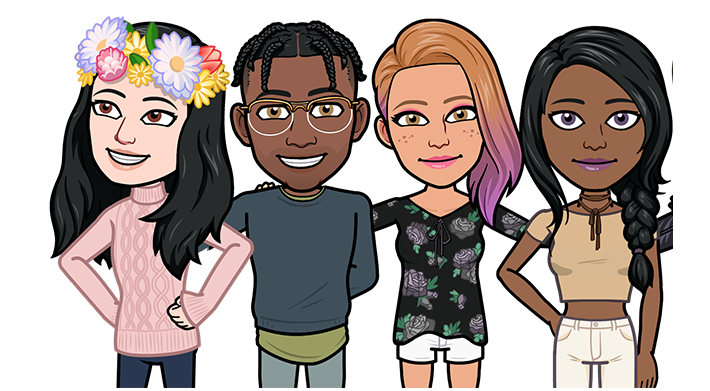 BITMOJI Deluxe was introduced this month. An update to the app that came with easier avatar creation, and a plethora of options more tailored to a diverse crowd. But was it enough? For some students, it was a step in the right direction, while others preferred to stay behind.

Adalia Crane, a sophomore majoring in criminal justice, likes the options available to her because the variety provides a uniqueness to each BITMOJI. Previously, she noticed that “everyone’s looked basically the same.”

Now users can customize their BITMOJI to the point of rainbow skin, and hair color.
Despite a wider variety of shades, the app still hasn’t quite nailed it.

“I haven’t found one where it’s like ‘Yep! That’s my color.’,” said Matt Chai, a junior majoring in criminal justice.

The colors are still definitive, meaning you have to choose from what they give you, so they may have more options but that doesn’t mean they’re options you need. “Next time I’d say have a color slider so I can find a better skin shade,” said Chai.

The hair section is the real highlight of the update, and it’s been causing mixed feelings for users. The update offers many more options for curlier hair types, but that doesn’t mean they’re the right options.

“I didn’t like the hairstyles because I felt like I couldn’t find my exact hairstyle,” said Ariel Williams, a sophomore majoring in interior design.

Despite many style options, they are also definitive. Users can’t cross style, for example putting a wavy-haired look into a bun, or having their exact curl pattern in a style they usually use. There was one customization option that seemed to make all the difference.

“You can change a lot of features to really make it look like you. For example, I have my hair dyed at the ends and I was able to add that feature in,” said Williams.

Although styles were tough to match, there were new options for curly haired girls and boys to pick from. There are more dread options for if you’re straight like Damian Marley, or curly like Chloe x Halle. There are braids for Young M.A and Travis Scott, and space buns and cornrows for everyone in between.

While some students struggled with their updated look, others were excited for a change.

“I usually wear my hair in a high pineapple puff, so before I couldn’t find my hair.” Said Tanaysia Jefferson, a junior majoring in criminal justice and forensic psychology.

The afro options are more impressive, but every natural hair type is different. This makes the concept of a style easy to execute, while the exact look itself is hard to match up.
Beyond that is a variety of eye, nose, ear, and jaw updates with subtle differences. Some students struggled with this aspect.

“I didn’t like that it felt harder to actually match my BITMOJI to what I look like – there were too many options for things that should seem simple, like nose shape,” said Angela Tricarico, a Junior majoring in communications.

Although the update offered more specific styles, there seemed to be a line between more and too much. In the end, she changed back to her original design, and others felt like following suit.

“If I could, I would change it back,” said Chai, who admitted he did enjoy knowing there were more options.

Overall there were mixed feelings about the update. Students appreciated that there was a greater variety of options available, but unhappy with the fact that the update couldn’t quite get it right. I know when I first saw the update I was floored and overjoyed, but quickly also realized I wasn’t satisfied with my options. I love that there are more hair options for everyone else, even though there aren’t more for me.

The biggest plus came in skin tone for me. My BITMOJI had a richer skin tone than my own because what was available was either too dark or too light. When I went lighter, I looked, as my cousin once put it, as if I caught suds like SpongeBob did that one episode he was sick.