Book Review: The Great American Whatever by Tim Federle 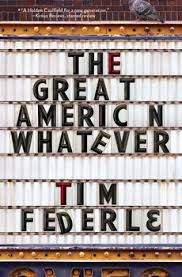 In young adult literature, it is rare to find plot lines that does not feel excessive, overdone, and fake. The Great American Whatever, the debut young-adult novel from Tim Federle, is none of these things. It’s a refreshingly real take on grief, sexuality and coming of age.

“I don’t consider myself to be precious, necessarily, but give me air-conditioning or give me death,” is the first line of the book and it gives readers a pretty good idea of what the narrator, Quinn Roberts, is like; melodramatic, sarcastic and relatable.

Quinn is a 16-year-old who shuts down in the face of tragedy. After his older sister and creative partner Annabeth are killed in a car accident, Quinn struggles with grief and guilt. He stops going to school, charging his phone, and leaving his house in general. His mother is obese, unemployed and sleeping on the couch, while his father simply isn’t there. He uses video-chat to talk to his therapist.

Since he was 10, he wanted to make films with girlfriend Annabeth, inspired by a former neighbor who was a screenwriter. They called themselves Q & A Productions, and the night of the accident, Quinn stopped writing his screenplay – he has not picked it back up since.

Geoff, his best friend, just wants Quinn to go outside again; he drags Quinn to his first college party. Quinn meets a guy at the party – a guy he actually likes named Amir, who is a charming college student. This begins a whirlwind week for the first time since Annabeth died. Quinn takes control of his life and becomes his own version of a hero’s journey.

Without giving too much away, there is not much about The Great American Whatever that feels typical or cliché. While there is a “boy-meets-boy, boy falls hard” storyline, it is not the only storyline. It is important to note that even though Quinn is gay and romantically involved at points, he still struggles with coming out to people and his sexuality is a non-issue in terms of the overall plot of the book.

“Quinn, is this about you being gay? I literally don’t care at all.” says Geoff at one point in the novel, reacting to Quinn’s sexuality the way a best friend should. It is refreshing to see this friendship between two teens, one gay and one straight, where sexuality really means nothing.

The Great American Whatever takes twists and turns that are not predictable, including one of the novel’s points of conflict that comes late in the story. The book’s setting, Pittsburgh, feels authentic – it is clear that Federle, who grew up in the city, knows and highlights it well. The story was actually inspired by an accident that took place near Federle’s high school.

Federle is a former Broadway actor who, before this novel, has only written a series of semi-autobiographical novels for pre-teens and three cocktail recipe books. He has a gift for capturing character’s voices.

It was clear in his Nate series, where he wrote through the voice of an 13-year-old boy running away from home to fulfill his big Broadway dreams, and it is clear, where Federle writes in the first person as Quinn. The addition of screenplay scenes offers a deeper look into Quinn’s screenwriter side that he had lost when he lost his sister. Federle knows exactly where to use humor, in both the dialogue and in Quinn’s inner monologue. His inner thoughts can be self-deprecatingly funny.

There is a brutally honest quality to this story. Grieving is not easy, coming to terms with one’s sexuality is not easy, and learning just to live again after putting your life on pause is not easy; Quinn struggles. This book does not sugarcoat it. He realizes that everything he thought he knew might have not been exactly the way he thought it to be, but that is okay. He is human, and this is what life is about, and he has to learn that and grow from it.

If The Great American Whatever is a love story, it is a self-love story. The book’s summary describes it as “laugh-out-loud sad,” and it is a testament to Federle’s writing style; the humor holds up so well despite the subject matter.

The Great American Whatever is without a doubt one of the best young adult releases in 2016; it is hard to put down once you start, and when you finish, it sticks with you.