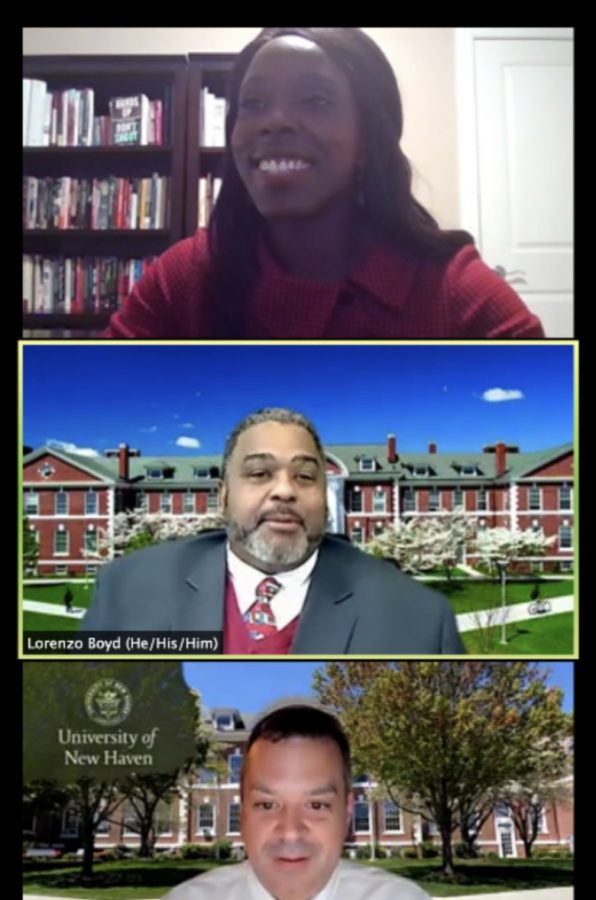 On Tuesday, the office of the V.P. for diversity & inclusion and the Myatt Center for Diversity & Inclusion hosted a webinar entitled “Hands Up Don’t Shoot: How Protests Changed America.” The webinar featured critically acclaimed author and scholar Jennifer Cobbina who spoke about her book, “Hands Up, Don’t Shoot: Why the Protests in Ferguson and Baltimore Matter, and How They Changed America.”

Cobbina is an associate professor at the University of Michigan within the school of criminal justice. Her research focuses on corrections, recidivism and how race, class and gender impact victimization and an individual’s interactions with the criminal justice system. Her book is a product of research she conducted using detailed interviews to explore the Ferguson, Missori and Baltimore, Maryland protests and riots following the police killings of Michael Brown and Freddie Gray.

In the aftermath of these killings, among others, the Department of Justice conducted research into policing and the criminal justice system in both Ferguson and Baltimore. The report found that Black citizens were more likely to be “stopped, searched, and arrested” but less likely to be found in possession of contraband (i.e. illegal substances or weapons).

“Hands Up, Don’t Shoot: Why the Protests in Ferguson and Baltimore Matter, and How They Changed America,” explores these instances and the statistics further. After interviewing 218 different individuals involved in protests, Cobbina found four common themes that lead to negative encounters with the police: aggressive policing, racial profiling, police disrespect, and the unfavorable treatment of women.

Cobbina shared quotes from her interviews to exemplify each of the above categories.

Darnell, a Black teenager from Ferguson said, “[The officer] comes back. [Hey says] ‘Didn’t I tell you motherf***ers… get the f**k out’ … ‘they just start whooped on all of us … they hit me in my face once, my ribs twice.”

Rosalind, a Black woman from Ferguson reported that she “called a police [officer] one time. I had a dispute with a neighbor and [the police] just came to fight… just grabbed me out the house… and beat [me] up.”

Like in her book, Cobbina said that positive encounters with police were typically due to “quick response time” and “police encounters void of assault.” She said that demonstrations occur when emotions of discontent and anger, grievances, belief in “individual efficacy” and “group efficacy” and collective identity coincide. Finally, she said that riots are “the language of the unheard” and are “a powerful mechanism,” although she would not participate in one herself.

In reviewing the police and governmental responses to protests, she said that the initial response used to be an “escalated force” tactic where police matched the aggression of protestors. This shifted to negotiated management and eventually again to what is presently used, strategic incapacitation: a militarized response to protests.

Once again, Cobbina shared quotes from protestors’ experiences with the police both directly and indirectly.

Javon, a Black Ferguson protestor, said that while he was in a car during a protest, “[the officer] put his gun to me, was like ‘don’t move, let me see your hands.’ But I already had my hands up though because it’s ‘hands up, don’t shoot’… And he put me in [hand]cuff and… had me to the ground for like two hours.”

According to Cobbina, experiences such as these affect protestors differently. She coined three terms to categorize protestors: ‘the Revolutionary,’ who protests daily, ‘the Intermittent,’ who has protested more than four times, and ‘the Tourist,’ who has protested less than three times. ‘The Revolutionary’ is likely to continue protesting despite the violent experience whereas ‘the Tourist’ is not likely to return to do so.

During the last thirty minutes, Lorenzo Boyd and Glenn McGee opened up the Q&A feature and allowed students to ask questions.

Student Kareem Jordan asked, “given the structural issues that are deep in policing that contribute to these issues and the deep mistrust Black communities have toward police, do you really believe true reconciliation can take place?”

Cobbina said that the U.S. must “engage in truth-telling,” as other countries have done regarding atrocities and publicly and systematically address… the sin of slavery,” in order for reconciliation to take place.

After the conclusion of the Q&A session, Boyd asked Cobbina to promote her book. Cobbina said that viewers could follow her on Twitter and LinkedIn, and visit her website.