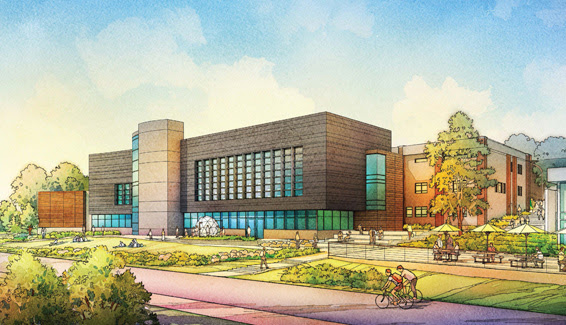 A new chapter in the University of New Haven’s history kicked off with the formal announcement of the Bergami Center for Science, Technology. A ceremony was held in Beckerman Recreation Center to honor Sam and Lois Bergami, the benefactors for which the new facility will be named.

The Bergami family name is one of the most easily recognizable names on the University of New Haven campus; in addition to Bergami Hall, there are also classrooms and the graduate campus named in their honor. The Bergami’s have a long history with the university; Sam Bergami is an alumnus of the university’s Executive MBA program and has served as chair of the Board for six years.

University President Steven H. Kaplan described the new building that will bear their name as “a signature space that will transform teaching and learning.”

The celebration on Tuesday, October 8 began with remarks from Stephen J. Morin, the university’s Vice President for University Advancement.

“Sam and Lois made this transformational gift and we blank. That’s the challenge,” he said, comparing the gift to a fill in the blank test question.

The center that the gift will fund is intended to be the cornerstone of the Charger Challenge, the University’s $100 million fundraising campaign, being put on the coincide with the celebration of the University’s centennial. The Charger Challenge officially launched in the spring, when it had already raised $49 million during a quiet phase. As of November 11, the Challenge has reached 68% of its goal.

When completed, the Bergami Center will stand adjacent to Buckman Hall at three floors and 40,000 square feet. The third floor will have cutting-edge science labs that will offer more than the wet labs campus already has. New communication studios, more smart classrooms, an atrium and café, and space for collaboration will also be a part of the new facility.

It will be a “vibrant center where students can come together across disciplines,” said Kaplan.

One of the key features of the Bergami Center will be the makerspace, filled with resources for hands on projects. Makerspaces are spaces where students can gather to create, invent, innovate and work on hands-on projects. It’s intended to connect students from all majors and give students an opportunity to follow passions they have that may not fall under their disciplines. They will be able to experiment with, and try new things.

Maria-Isabel Carnasciali, an associate professor in the Tagliatela College of Engineering, says that faculty are preparing for a new makerspace by putting one in Buckman Hall.

“[It will] remove the limitations of what we can teach and what the students can achieve,” said Carnasciali.

Kaplan says the center will help students to develop emerging and existing passions and that it is something the University has intended to create all along.

“We are investing in the future of students,” said Sam Bergami in the speech he gave during the event, “and what better investment to make.”