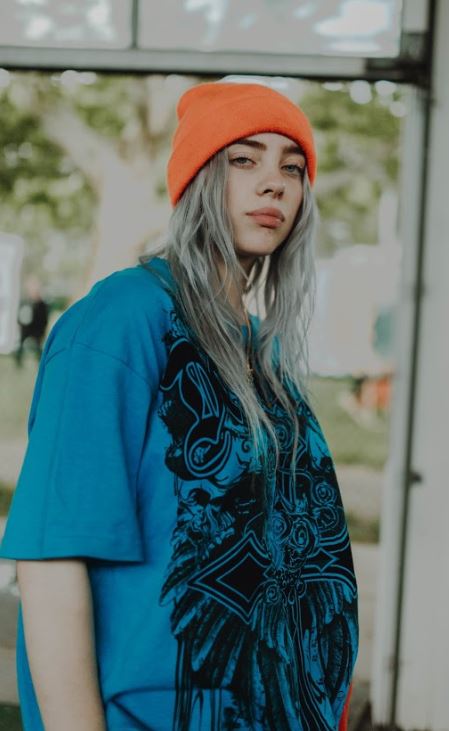 Billie Eilish after her set at Governors Ball Music Festival 2018

Billie Eilish released her debut album “When We All Fall Asleep, Where Do We Go?” On March 29, receiving an exceptional amount of praise. The 17-year-old singer’s first release was widely anticipated. Billie’s sharp rise in popularity came from her first single supported by Interscope in 2016, followed by her seven track EP “dont smile at me,” and collaboration “lovely” with Khalid. In a short period of time, Eilish has claimed her place in today’s pop music scene through a careful balance of vulnerability and indifference. “When We All Fall Asleep” reflects this success and showcases Eilish’s potential for growth.

Billie Eilish is a paradoxical pop star. Her rapid rise to fame has been supported by the duality of her being, seemingly split between her vocals and her brand. Those familiar with Eilish’s previous discography know that while her voice is powerful, it is just as equally fragile.,If you look at Billie’s social media and interviews, you will find a completely different persona: her social media contains colorful portraits of her drowning in oversized, neon streetwear branded with Gucci, Louis Vuitton, and more. The bold imagery is accompanied by her somewhat abrasive expression of her humor and opinions, which she is not afraid to put out for all to see on her Instagram stories.

Though Billie’s personality seems contradictory, her album explains it all. It not only brings life to Eilish’s persona, but celebrates its duality: the first song on the album reels listeners in with playful lyrics over a deep, bouncing beat with breathy vocals; and the album closes with moodier and heart-wrenching tracks “i love you” and “goodbye.” The production of each track is clean and complementary of each emotional scenario, delivering an album that listeners will replay over and over again.

What makes Eilish unique, and what stands out the most across all tracks, is her ability to share tender emotions and make them accessible to many. Though “When We All Fall Asleep” is not perfect, it is an exceptional debut.

At the time of its debut, When We All Fall Asleep debuted at #1 in 71 countries and charted in 106. The release was accompanied by several promotions that have pushed Eilish even further into all corners of creative consumer culture including an experiential pop-up with Spotify, a partnership with Adobe, and a limited merchandise drop with collaborator Takashi Murakami. Still, fans can’t get enough Billie— and with 23 sold-out tour dates in the U.S. and Canada alone, Eilish has a long road ahead.