‘Maxcy Hall has been taken off my shoulders’: Kaplan speaks on early retirement 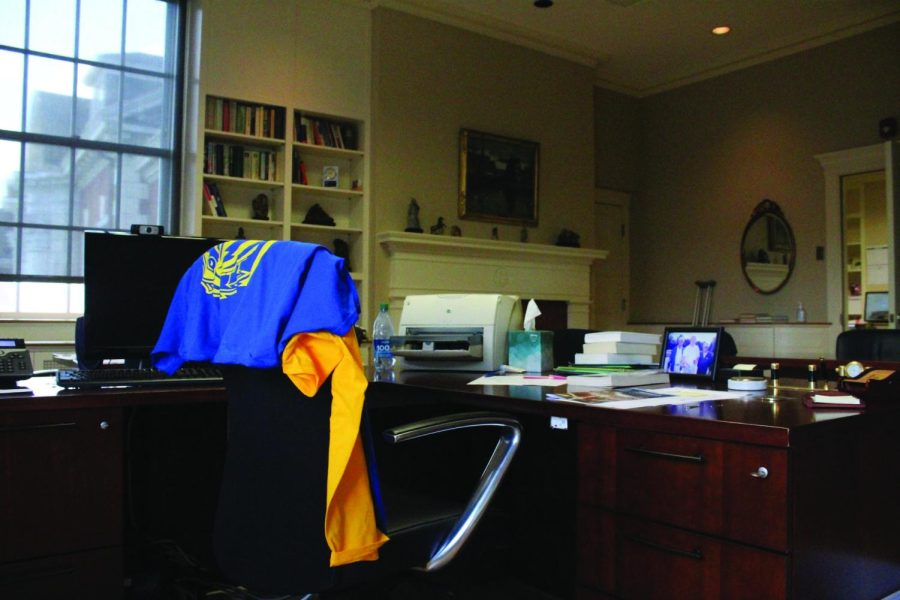 Chancellor Steven Kaplan recently composed his farewell address, following multiple emails to the university community regarding the decision to step down from his current position of leadership.

On Aug. 22, Kaplan sent out an email addressing “Members of the University Community,” though the general student population was not included, following up from his initial announcement of retirement earlier in the month. This notice came as a request from the chair of the Board of Governors, Charles Pompea, who indicated that Kaplan should “provide to the community and to the Board a fuller explanation of the issues and events that led to [his] decision to retire next summer.”

In the email, Kaplan outlined the reasons for his departure, and said that he felt as if his initial announcement had resulted in what he referred to as a misinterpretation of facts. The message covered the processes surrounding transitions of leadership within the university’s administrative team, and provided insight on Kaplan’s perceived areas of dissonance in agreement between the university staff and faculty and himself.

Nearing the end of this email, Kaplan said “For those of you who wanted me to leave, I am doing what you allegedly wanted, though for my own reasons and not yours.”

After the start of the fall semester, Kaplan, who is currently working remotely from his property in southern France, spoke further on his reasoning for taking a step down from his position at the university. He said that his plans to retire started back in 2019; however, the Board of Governors asked him to extend his stay in order to support the university throughout the pandemic. More recently, he said that the shift in leadership plan, in which the role of Chancellor of the university was created, was established to serve as a compromise to again extend Kaplan’s stay to work at the university, despite his desire for a sooner retirement. The role was constructed to grant him the ability to step back and spend less time consumed by work, allowing him more time to spend with his family, which he repeatedly referenced as a primary motive for his retirement.

He said that the role of chancellor is not actually necessary due to the size of the University of New Haven, and that it was merely a “creative solution” to extend his stay. There are no plans to fill this role after he leaves.

When voicing his feelings following his announcement to the university community, Kaplan said that it was as if “[the weight of] Maxcy Hall had been taken off my shoulders.”

He said he “reluctantly” took on the chancellor position, though he also reiterated his love for the university. These feelings came as a product of what he identified as his reasons for leaving, which centered around his grandchildren, who he said sparked the need to spend more time at home, while also saying the reasons for retiring had “been building” for quite some time.

When describing his relationship with university staff, Kaplan said he had in fact hired “close to 90 percent of the faculty and a lot of the staff,” and that he “decided I was tired of the disagreements.” He said that issues with other members of university staff did not contribute to him stepping down early.

However, in his email a week prior, he wrote, “some members of the faculty had expressed deep concern in a faculty meeting about what they claimed was a hostile work environment in response to our provost deciding to return to her former institution, and that the University was in serious financial difficulty. Dr. Guzman, who as Senate Chair was acting in good faith on behalf of the faculty, told me that the faculty planned to take up a vote of no-confidence in me, and also wanted to engage an outside firm to assess whether or not there is a hostile work environment at UNH.”

He acknowledged and refuted such concerns, speaking on tensions with the faculty, saying, “Speculation about a dire financial future, I told her, was not based in fact and dangerous to our future. Her response to this was that faculty found my public statements about our finances hypocritical and even ‘schizophrenic.’”

Later, Kaplan said he found the university “struggling” when he came into it , and now, as he is retiring, he claims that the institution has become “strong and thriving.”

“Of course I’d like to think when I leave you’ll be losing something,” he also said on the departure.

He then said it was “time for new ideas” to circulate, as he voiced his hope that those who succeed him will bring new light into the university community.

When reflecting on regrets surrounding his time as President and then as Chancellor, Kaplan said that he had not spent enough time with the student body, and called it a “trade-off” that he has “always been frustrated by.”

In an example, Kaplan said he would tell student athletes that “I can come to your games, or I can meet with donors who can support you,” reiterating the idea that he felt unable to succeed in his role of maintaining financial stability while also being a present figure in student life.

In advice to President Sheahon Zenger, Kaplan said he hopes for himto spend more time immersed with the students. He said it is important for the president to focus on student life, as opposed to the time he focused on academics and funding. Zenger later voiced identical plans of his own going into the fall semester.

Zenger repeatedly said that students lie at the center of his peripheral focus, in what he referred to as a mosaic. He said that he saw the uptaking of the presidency as “an opportunity to help move the institution forward,” and would have taken it regardless of Kaplan’s timeline of retirement.

Zenger also said that his current relationship with the staff and faculty members is entirely positive with no foreseeable issues or concerns arising in the future.

To students, Zenger closed by saying “my door is always open,” and that he thrives off of an abundance of interaction with students day-to-day.

Kaplan, in his email, wrote “I am the first to admit that I have made my fair share of mistakes as your president over the past eighteen years. And I do not begrudge anyone for feeling I have somehow failed them.”

Kaplan equally spoke in gratitude by saying, “I’m ready to move into the next phase of my life, but I will really miss the university and what I’ve been doing. I feel honored to have served in the role I was in.”