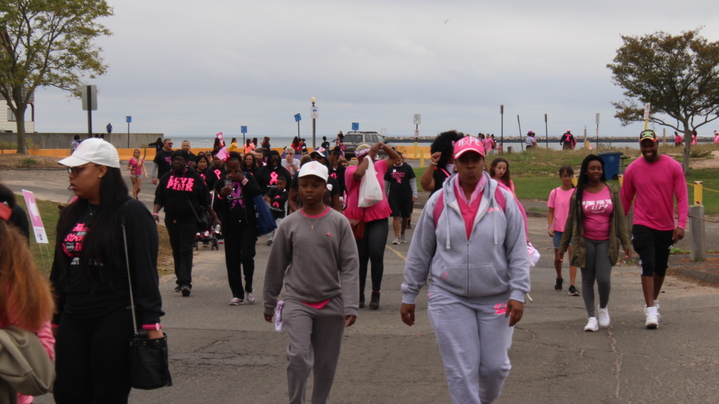 The American Cancer Society (ACS) hosted a Breast Cancer awareness walk in Lightpoint Park this past Sunday. Following the walk was a short ceremony in which survivors and their relatives shared their stories. During which, participating walkers gathered in groups to socialize amongst each other before the walk proper.

Supporters walked around the ocean-side park, marching in unity along the gravel path.

The walk was held as part of the ACS Making Strides Against Breast Cancer series of events, drawing in participants from across the state.

One walker, who preferred to remain anonymous, said that the event had become a yearly gathering for their family and friends ever since their sister passed away due to breast cancer five years ago. A theme that was shared amongst the rest of the walkers was that while they were originally brought to the event by tragedy, they made friends and strengthened existing bonds through being part of the events.

“My aunt passed away two years ago,” Patrick Martin said, “soon after that, her sister told me about these walks.”

While the original goal is to make it a full lap around the park, some walkers were intending on continuing beyond that or finishing early, but they weren’t penalized for either. Regardless of progress, all participants were invited to spend extra time together at a small party set up overlooking the beach.

The American Cancer Society website features a calendar with similar events across the country, in which people can join a walk such as the awareness walk, taking place in East Lyme and Litchfield County on October 22.

According to the National Breast Cancer Foundation, breast cancer is the second leading cause of death in women. “Although breast cancer in men is rare, an estimated 2,470 men will be diagnosed with breast cancer,” their website says.

Volunteers at the event urged others to join these events and educate themselves about breast cancer and how to identify the early signs of it. Standard procedure is explained on the American Cancer Society’s website, Cancer.org. There, readers can educate themselves about breast cancer and other forms of cancer as well as find out what treatment they can seek for themselves or loved ones. Alternatively, donations are always being accepted and will be put towards improving treatment and researching possible answers.